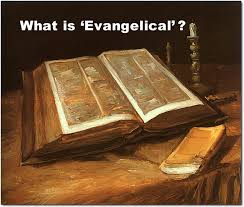 I recently taught a a series on “What is an Evangelical?” It was an eye opening experience. There are, of course, many statements out there on what it means to be evangelical. The most notable include “An Evangelical Manifesto” and The Gospel Coalition’s “Foundational Documents.” Now both of these have writers and/or supporters for whom I have great respect. The problem is that we still do not have a clear definition of what it means to be “evangelical.” It becomes even more confusing when we add into this the term as it is commonly used today.

So what does evangelical really mean? Evangelical is a term that is thrown around today as much in the media as in the church. It is, in point of fact, a terms that is as common today as “White House.” Yet, while there is no question what is meant when people refer to the “White House,” evangelical is not so clear, despite being in the public vernacular for the last 30 years.

The presidential election of 1976 placed “Evangelicalism” at the center stage as both Gerald Ford and Jimmy Carter readily identified themselves as born-again evangelicals. America sat up and said, “evan-what?” This had such an impact that Time Magazine declared 1977, following the election, the “Year of the Evangelical.” Since then the battle has been on to define evangelicalism.

What I have found is that we have mistakenly come to identify “evangelical” with a political position, most often conservative Republican. (Understand that I am of this political persuasion but have come to believe it is not a defining characteristic of being evangelical.) I have also found that much of what the media refers to as evangelical today, is not truly evangelical. As a result of my study, I have come to a conclusion that there are 10 of what I refer to as “Historically Essential Components of Evangelicalism.” It is these essentials that I use to define “Historic Evangelicalism.” These ten essentials are:

It is these 10 point I refer to when I use the term, “Historic Evangelicalism.”