Hello, and thank you for taking some time to read my little letter. Of course, if you are here, then you know who I am. I, of course, am known by many names around the world. It the United States, I am known as Santa Claus. In France, they call me Pere Noel. People in China know me as Dun Che Lao Ren. I am Kanakaloka in Hawaii. In Italy, they call me Babbo Natale. In Holland, I am known as Sinterklaas. In England, I am Father Christmas.  The list can go on and on, but my real name is actually Nicholas.

I was born more than 1,700 years ago in Patara, Lycia. That is found in modern-day Turkey.  From an early age, I was committed to following Jesus. You know, as a young boy, I would often get up early so that I could go to the church and pray. I was there most mornings. One morning something interesting happened to me. As I walked in the door, I was met by the old priest who served the local church. He stood there for a minute and looked me up and down. He then told me that he had a vision about a person who would become a Bishop over many churches. In the vision, he had been told that the first person to enter the church in the morning would be the person the vision was about. Imagine his surprise when it was just a boy who was the first to walk in the door. No wonder he had to pause and look before he began to speak.

After telling me about the vision, he asked me what my name was. Now I could have said, “I am Nicholas, the son of Theophanes and Nonna.” I mean, he surely knew who my parents were. They were devout Christians who regularly gave to the poor and needy. But that was not my response. Instead, I looked him in the eye and said, “I am Nicholas, the sinner.” You see, I had learned long ago the words of the Apostle Paul when he wrote, “All have sinned and fall short of the glory of God.” Many people take pride in who their family is, or in what they have accomplished. But I realized that these were meaningless in comparison to my relationship with God. It is only when we are willing to accept that we are sinners, can we begin to grow in knowing and serving God. 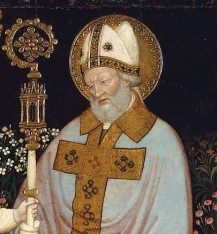 From that time on, I committed my life to serve God. I cared for the poor. I gave to the needy I defended the Christian faith in the face of adversity. I led the church as the Bishop of Myra. And I shared the message that came from the Angel that first Christmas morning, “For unto you is born this day, in the City of David, a Savior, who is Christ the Lord.

There are lots of stories about me and the things that happened in my life. I am not going to go into all of them, I will share one other with you. There is a story about when I helped a poor family with three daughters who wanted to get married. The problem was that in those days, you had to have money to get married. The called it a dowry. Since the family was very poor, they did not have the money for their three daughters to get married. Since I had money that I had inherited from my parents, I wanted to do what God wanted and help the poor. The thing is I did not want any attention for doing it, so I had to find a way to do it without anyone finding out.  I planned to sneak up to the house at night, toss a bag of money in the window, and quickly run away without being seen. It seemed a good plan to me, so the first night I did just that and provide enough money for the oldest daughter to get married.

On a second night, I did it once more and was able to give enough money for the second daughter to get married. Finally, on a third night, I again snuck up to the house and quickly tossed the bag of money in the window. This time, however, when I turned to run, I learned that the Father had been waiting to see if money would come for the third daughter. He hoped to find out where the money came from so he could express his thanks. Sure enough, this time, he caught me. I asked him to keep my secret and agreed to not tell anyone.

Do you want to know a funny side note in this story? Back in those days, people would wash out their stockings in the evening and hang them up overnight to dry. Well, sure enough, the daughters of the family were no different. They would hang up their stocking each night to dry. It turns out that one of those nights when I tossed in the bag of money, it landed in a surprising place. I bet you guessed where. That’s right, it landed right in the stocking. If you ever wondered where that tradition came from, now you know.

Today most people think of me at Christmas time. When they are giving and receiving gifts, they remember how I gave gifts then. Especially the story of the stocking. It is nice to be remembered and included in everyone’s celebration. But sometimes I think people spend a little too much time thinking about me and the forget what Christmas is really all about. Christmas is not about me, but Jesus.

When you celebrate Christmas, enjoy yourself. When you exchange gifts, be thankful. But also take time to remember that as wonderful as any of these gifts may be, the greatest gift we can ever receive comes only from Jesus, the gift of forgiveness for our sins. This is what the Apostle Paul tells us in the Bible when he writes, “The gift of God is eternal life in Christ Jesus our Lord.”

“For God so loved the world that he gave his one and only Son, that whoever believes in him shall not perish but have eternal life.” John 3:16