Last night we had a Court of Honor for the Boy Scouts. For those who are unfamiliar with this, a Court of Honor is an opportunity for the scouts to be publicly recognized for their achievements, merit badges earned and rank advancements. This time ends, as all scout meetings do, with a Scoutmaster’s minute, a chance for the Scoutmaster to leave the boys with one last nugget of wisdom before the evening ends. As the Scoutmaster was speaking one phrase jumped out at me from all that he said, “It is more honorable to fail, than to cheat.”

Unfortunately, it is not just the culture around us. How many of us have unwittingly propagated this view with our own children. I was chatting with a mother at the library toward the end of summer and we were talking about our kids going back to school. As we talked she relayed a story of someone she knew who had attended a very highly regarded and well known High School in the Chicago northern suburbs. She said that one day she was talking to this friend about a school assignment that was due and was wondering if she was able to get it done. Her friends response was that her dad was up all night writing it.

In this case, there was nothing unwitting about it. Her father wanted to make sure the assignment got done and done right, to help ensure his daughter “succeeded.” We certainly wouldn’t do this, but how many Cub Scout or Awana dad’s have ended out designing and building their child’s Pinewood Derby or Grand Prix car for them rather than guiding them in building and designing their own car. How many of us have seen a bad grade on our child’s report card and the first thing through out minds, if not out of our mouths was , “that is unacceptable, your smarter than this.” How many of us, when our child has gotten in big trouble have responded with “you embarrass me and the whole family.” Each of these in their own way, from blatantly obvious to subtle innuendo, teaches our children that they must be perfect and that failure is not an option.

So if this is what we are teaching, how can it be true that it is more honorable to fail, than to cheat. After all, cheating is just a way of ensuring that we stay ahead of the game. Perhaps we as parents need to correct our understanding of our role, before we think about correcting this misperception in our children.

As parent’s we seem to think that there is no greater compliment than to have someone tell us how well behaved our children are or how smart they are. This of course feeds our ego that we are doing such a good job. Well, we want people to continue to think we are good parents so we do what we can to ensure that our children never get in trouble and that they do not fail. Unfortunately this can easily turn into situations were we are doing work for our children to ensure they succeed or covering up their mistakes so they do not get in trouble and no one sees our “failure” as parents. I heard it this was, we have come to see our role as parent to be raising perfect kids, but our real role should be to raise responsible adults. And as hard as it is to hear, and I assure you I don’t what to hear it either, becoming a responsible adult means failing, sometimes in a huge way, as a child (and even still some as adults). It is through failure that we learn to succeed. Henry Ford’s original automobile design did not have a reverse gear. Thomas Edison said about failure to develop the incandescent light bulb, “I have not failed. I’ve just found 10,000 ways that wont work.” When we “help” our children and prevent them from failing, we are not helping at all, but doing an injustice. We are not teaching them that success is a result of hard work and you may fail along the way, rather we are teaching them to succeed at all cost and that failure is not an option.

So we come back to the idea that it is more honorable to fail, that to cheat. No wonder this seems such a foreign concept. Children have had ingrained in them the idea that as long as you succeed it does not matter how you got there. For them, and to many of us as adults, the ends justifies the means.

Now before I am criticized as promoting failure as a good thing, let me be clear that I am not saying that. there are two reasons for failure. The first is that you are just not putting the necessary work into it (lazy, distracted, apathetic, etc.). Failure for this reason is not honorable, but still something can be learned. A person can learn that they need to be more focused or more disciplined. The second is failure is that even though you tried your hardest you simply did not understand it or were not able to do it. Failure for this reason is honorable, because you worked hard. From this failure you learn that you may need to ask for help (something most of us do not do well), you may have areas you need to focus on more, or there may be things that simply are not within your realm of capabilities (this last one is a hard pill to swallow in a society that insist on you can be anything you want, and that everyone is a winner, but I digress.)

In Luke 16:10 Jesus teaches that “If you are faithful in little things, you will be faithful in large ones. But if you are dishonest in little things, you won’t be honest with greater responsibilities.”You may think that a little thing here or there doesn’t matter, but those little “cheats” grow and can have profound impact down the road. We read in Proverbs 19:1 that it is “Better to be poor and honest than to be dishonest and a fool.” and in Provers 10:9 that “People with integrity walk safely, but those who follow crooked paths will slip and fall.”

Cheating may appear to produce the desired end result, but it is simply an appearance and as two dimensional as the images on the television screen. True success for real life requires hard work, integrity and occasional failure. We need to learn to regard failure not as a sign of weakness, but as an opportunity to learn. We need to learn that it truly is more honorable to fail, than to cheat. 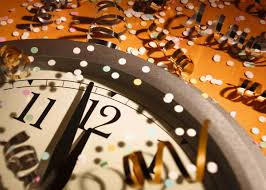 I have been pondering the idea of New Years resolutions. They have a long history going back to the early Roman Empire and continuing though today as detailed in the article “Resolutions Worth Keeping” by Chris Armstrong, found in Christian History magazine.

Now if we are all honest, at some point in our lives we have probably taken part in making New Year’s resolutions. These resolutions often include such things as loosing weight, exercising more, eating healthier, spending time with family and friends and being nicer to people.

There is, of course, nothing wrong with these resolutions. But how do our resolutions usually work out. If we chooses to loose weight, odds are we binge on food through December 31 under the idea that we will suddenly change on January 1. And what happens after January 1. We may do well for a day, for a week or even a little longer, but then comes that day when it slips our mind and without thinking we eat that thing we shouldn’t have. We then see ourselves as having failed. Often we say, well, since I have already eaten this, I will just take the rest of the day off and start up again tomorrow. We continue this way for a while, slipping here or there and restarting each time until we finally say, “what’s the point?” “I keep stumbling.” So we end out pitching the whole resolution.

So what is the problem. First we treat January 1 as though it has some kind of magical powers. We think we can do whatever up until midnight and then we will magically gain the ability to resist what we have been indulging in. This is like deciding that we are going run a marathon without having prepared and trained for it. It is not just the date or even our decision that will make the difference, but we must also change our habits and this is something that is not done over night. It takes time. We can not realistically think that we are going to change overnight, even if it is a “New Year.”

Second, we to quickly see a stumble as a failure and give up. But stumbling is not a failure, it is a chance to grow. It is from these experiences that we better learn to deal with temptations and bad habits. How do we grow, by correcting the error immediately. When we say, well I will continue this for the rest of the day and start again tomorrow, we are actually rewarding our stumbling, making it easier and easier each time we stumble to just let it slide. Soon it even becomes easy to justify a conscience decision to violate our resolution. We need to realize that stumbling only becomes failure when we do not pick ourselves back up and continue on.

It is the same way with the sin in our lives. We live a life indulging in our personal sins (over eating, drunkenness, pornography, sexual sins, etc.) and then think we can just put these things behind us the day we make a commitment to God that we are going to change. (Yes, I have heard the stories of the life changing conversions. The heroin addict who came to faith and the addiction was miraculously cured. I also believe that while this can happen, it is the exception and not the rule.) We need to accept that change is going to be a process and that it may take a long time. There is no magic pill that will make it all go away overnight. There will be times that we stumble, but what do we do with those stumblings? Do we make excuses? Do we use it as an opportunity to indulge? Or do we correct the behavior immediately? Do we pick ourselves up and move on?

You see, a resolution is not a one time thing. It is an ongoing commitment. In a world were we want, and to often get, things instantly, we need to slow down and accept that things take time. That changes will not just happen, but rather that we will need to work for them.

But remember this, we do not need to do this alone. We find accountability and support in friends and family. And for those of us who know Jesus as our personal Savior, we find our strength in him alone.

“So whether you eat or drink or whatever you do, do it all for the glory of God”
I Corinthians 10:31